I had often wanted to take a shot at model building with polymer clay, and I was feeling like taking a break from drawing and painting for a bit, so I decided to hop on to the new venture.  Now what would I make with the clay.  Well it just happens lately I was on a nostalgic trip to my past childhood, and came to recall this game called Mortal Kombat.

Now who here hasn’t heard of Mortal Kombat.  Well in its shocking tenth installment it’s hard not to know about the game most notorious for its gore and violence, and the newest one just amped up the gross factor to the nth degree thanks to the ever fast changing technological advancement of computer graphics.  I remembered trying it out at the local arcade in the old days but I sucked, miserably.  (I couldn’t even get past the first round, that’s how bad I was).  It never became my cup of tea, I didn’t find much amusement in ripping out the head and spine after beating the guy into submission (not that I ever got that chance of course, actually it was me getting the death sentence).  However I was intrigued with the backstory and the characters were pretty cool.  One of my favorite was this guy:

That’s right, Raiden, the might God of Thunder and protector of the human realm from the forces of evil.  There was no getting past those fiery lightning strikes and that mighty cone hat.  He is originally based on the actual God of Thunder, Raijin, from the  Japanese mythology.  He has a brother, the God of Wind Fujin, who also makes an appearance in the games.

I started by scribbling away in my notebook sketching out a concept for the finished product.  I knew I wanted to make it similar to those popular Kidrobot vinyl figures, which I have a pretty sizable collection of (I might have mentioned it here in the past post how I was on a scavenger hunt for these elusive Street Fighter mini figures).  And considering there was no Kidrobot version of MK series I decided to make my own.

Here was the just about right size and proportion and form for Raiden.  Now I probably won’t make a mirror copy but at least I can get about close to it.

I bought these little packets at the Joann store (they’d have it at just about any craft stores near you.).  Now they come in all sorts of colors and even in much larger sizes, but I want to start small first, and use just one color so that I can paint it on later.  Note these are baking clays which means you have to pop them in the oven to make them nice and hard.  They do sell the air dry kinds which doesn’t require cooking but I want to try these first. 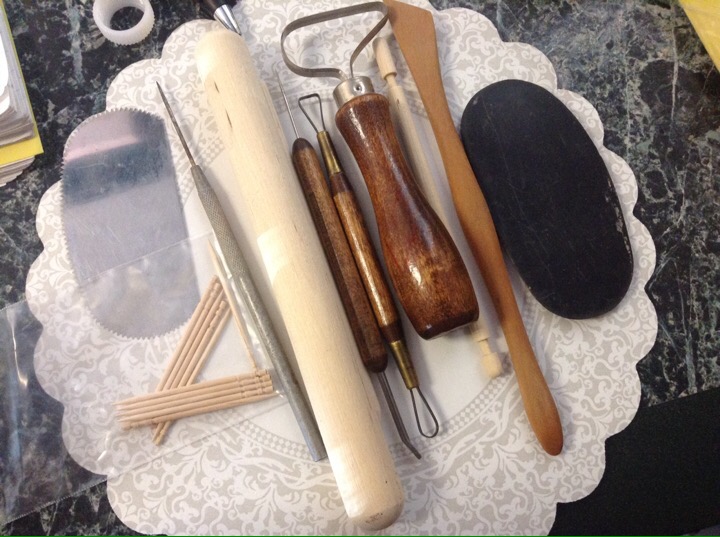 The necessary tools needed for building and sculpting the clay.  Luckily for me I had these tools that my sister used for ceramic class long ago, so there was no need to spend extra bucks to buy them separately.  Asi will learn later you can use pretty much anything to work with the clay, as long as you don’t plan on reusing the same tool for cooking. Yes the clays are toxic so never mix them up with your lunch.

I’m going to be recording my actions with clay on camera so you can watch how I go about with my project.  Next time I’ll have the vids up and ready.

Posted on April 22, 2016 by theartistaslisalee

← Cartoon of the Day : When the World Lies on Your Head…
{Reblog from} — Cristian Mihai →