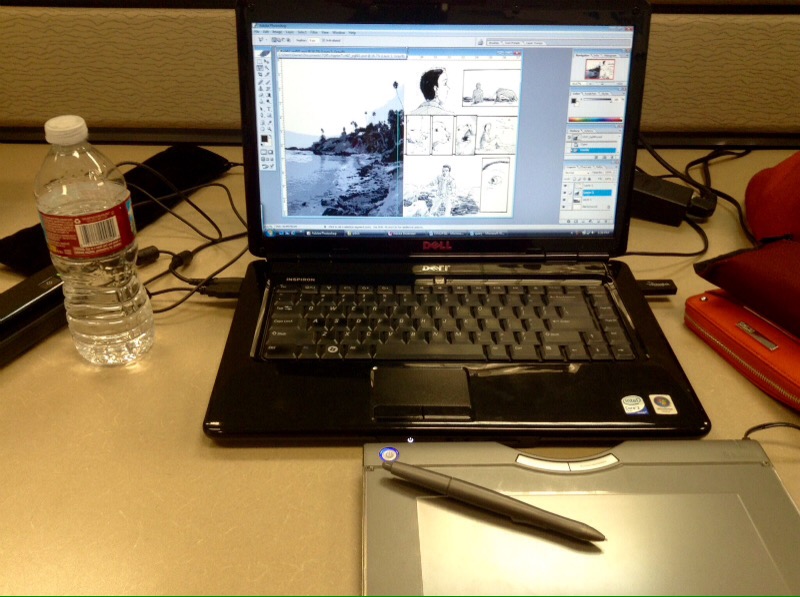 So hard at work on my graphic novel.  Progress is unfortunately veeeeerrrrrrrryyyyyyy slow, if I could have more time and space it’d be so much better, but alas the reality sets…a quiet little square space at a local Kinkos will have to do for now


So as promised a short tidbit about the novel:

In a new age of social unrest and growing gap between the classes, a cyber-terrorist group called Revolutions has staged a secret rebellion against the small population that are rich, powerful, and also corrupt, holding them responsible for all the society’s problems.  The protagonist, Vance Henriksen, a reformed assassin for hire, leads a small ragtag team to track down and execute the elites that have been placed on the Revolutions’ ‘hit list.’ Ironically, Vance was once indentured to the very people he now hunts, a fact that, along with his own tormented past, will soon come back to bite him and his teammates.

The title comes from a line in Oscar Wilde’s “The Ballad of Reading Gaol” which alludes to the redemptive spirit of sinners who repent of his crimes. And we know the phrase “tears of blood” refers to the emotional response to an extreme agony and pain.  The basic premise follows an anarchist group targeting the wealthy and the powerful in a typical class struggle that is all too familiar to us, as we can see happening right now in our time, but the story is less about the poor triumphing over the rich than it is about self-reflection, redemption, and the real price of vengeance and justice by means of violence.  It delves a lot deeper in personal aspects on each character, and the ultimate message is not purely political or social, deviating from expectations

So this was the brief I used when sending out the proposal to massive number of publishers I could find from the online directory that deals with graphic novels about several years ago.  And, well, let’s just say my email server is full of their responses saying thanks but it’s not our style, good luck in the future ( there are still few others that hadn’t bothered to write back, so it’s basically a silent NO).  Now I’m researching the road of self-publishing, and thanks to the Internet it’s ever easier than before to put your creations out to the general public, even if there is very dim chance of making any real bucks off of it.  But I’ve since cast aside such ambition, and just looking to share my stuff with anyone even for free.  As long as there are people willing to put the time to even take a peek, it’ll be enough.