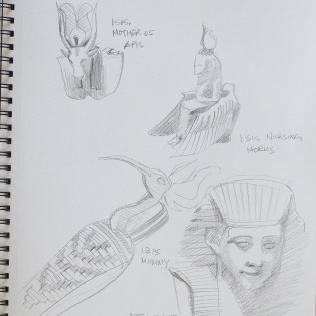 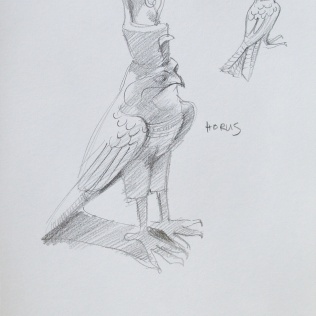 Since grade school I had quite the fascination for all things Ancient Egypt. I’d check out every book available at the library and drowned myself in the land of pyramids, pharaohs, and mummies. And since then whoever there was an exhibition of Egyptian artifacts open in a nearby museum I was sure to go. This time was the exhibit of animals that had been mummified and adorned in beautifully crafted coffins and wrappings, much like the human counterparts, down at the Bowers Museum of Cultural Arts in Orange County, near my home. And just like at the Bodies Exhibit I took my sketchbook and made sketches on site of numerous mummified animal coffins and the treasures they were buried with. Not surprisingly there were more cats, since Egyptians regarded cats as divine creatures. Other animals included falcon, ibis, jackals, and curiously, fishes. (Hm). It was a bit rushed because of the large crowd passing through.

Posted on May 12, 2014 by theartistaslisalee

← The Embrace
A short break… →