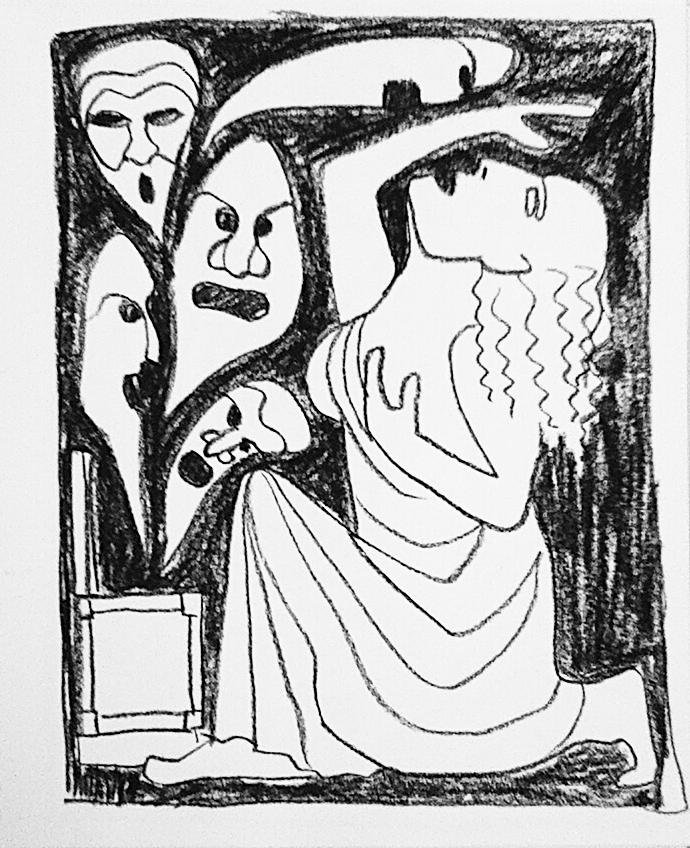 While waiting for the washers and dryers at a dusty old laundromat I with a sketchbook and a piece of charcoal in hand made several quick drawings of some well known Greek myths I’ve read as a kid, and an idea hit me.

Since grade school I was a total Greek mythology freak. The stories of those mighty gods and goddesses and their powers, as well as the magical adventures of some of the mightiest warriors ever known, fascinated me to no end. As I got older I gradually learned the significances of these mythic stories, that in the old days long before science and logic proved the existences of our world the elders would weave up tales to teach the youngsters how and why things were the way the were. In more recent times I came to really understand these mythologies and the characters that inhabit the world are reflections of our human behaviors and traits, and there are personality traits that have been named after the myths.

One such being the “Pandora’s Box” the term that is synonymous with the popular saying, “curiosity kills the cat.” One day the gods gave the beautiful lady called Pandora a box and instructed her to never open it. As hard as she tried, her curiosity got the best of her, and she took a peek. And BAM all the evils of mankind flooded out of that box and upon the unsuspecting human civilization, turning the world into a chaotic mess as we know it today. But fortunately there is a happy ending; as Pandora humbly closes up the empty box she puts inside it one piece if her own magic: hope, that even in the darkest hours mankind will have the will to carry on and thrive. Pandora’s Box now mainly refers to the forbidden knowledge, and whosoever should endeavor to learn it will bring upon him great sorrow.

I had decided to forgo ornate detailed figures for more simple stylized lines, just as Picasso had done in his graphic works. I didn’t bother with proportions either; I merely concentrated on filling as much of the paper space with varied lines and shapes using just the almighty charcoal. This helped me to really affirm my strengths lay in graphic arts; painting really wasn’t my forte. It’s quicker, and I get my ideas down more efficiently, and there is plenty of space to mess around. Sometime I plan on diving into printmaking, and I think this series will translate pretty well.

Stay tuned, the next few weeks will be all Greek to you…;)

Posted on March 23, 2014 by theartistaslisalee