Big Brother is Watching You…and demands you give money!

Or, at least, that’s what you might think of.

Have you seen this? 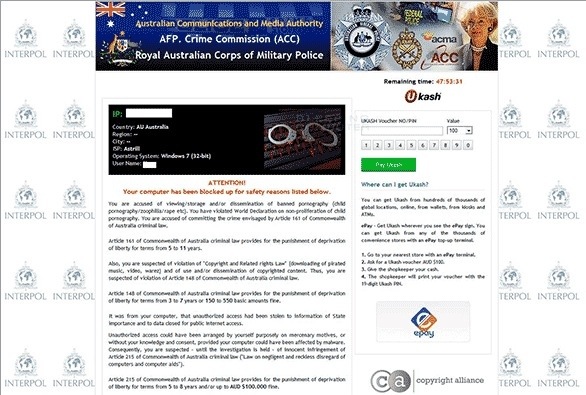 I turned on the computer one day and suddenly the screen goes white, then several seconds later this page pops up. Apparently Interpol has locked my computer for illegally downloading porn, and in order to end the lock I gotta pay $300 fine. I switched off and on the computer number of times and the screen still appears.
Now initially I was in state of panic. With all the fiasco about Wikileaks and secret government wiretapping swarming the news I thought the government dogs had been onto us as well. But what have I done to deserve this terror? The only thing I downloaded the night before was a free trial of Acrobat Reader which unfortunately didn’t work on my old system; I did no such thing as watching dirty porn, hell I don’t even think to look it up on Google. Now then I think, what if some sleazy hacker got into our system and tried to download porn and that’s what caught the Interpol’s attention? And now I’m stuck with the burden of spending $300 to clear the case, $300 which is a lot of money for the unemployed hermit.
Then I remembered reading somewhere about avoiding Internet scams that asks for money up front in order to fix a system malfunction on my computer. And it also hit me like a hammer this one time few years ago that I was hit with a similar incident, one involving a virus suddenly being detected and needing to pay $80 to erase the big right away, and I had fallen for it that time (later though I found out to be a total scam and I was able to retrieve that money.). Now the big One has struck again, this time in the guise of the Interpol, and claiming you must pay a hefty $300 fine to unlock the computer.
So I get my iPad since that hasn’t been infected yet, and look up ‘Interpol virus’ and sure enough it exists. And plenty of people like myself have fallen into that same web of deception. I went on to seek instructions on how to remove the damnable virus out of my hard drive, which required booting the system via BIOS (ugh I hate all this techno jargon my brain just wasn’t built for this); well it took several hours for the scan to complete, but unlike the other few times where that would have done the trick, this was one HELL of a virus. Long story short I had to take it down to the nearby computer repair shop where I learned I would have to install a whole new OS and lose all my old files for $60. I sighed, but what else can I do, at least it’s one fifth of what I almost lost earlier.
So there’s my tale of my struggle with the virus that plagued my computer. You can call this a cautionary tale; if you’ve already had a brush with the Interpol virus then this will be like old news. But if you haven’t, then beware, like you’ve heard it oh so many times before, be careful where you download stuff, and never ever open an email you don’t know. You’ve been warned…

Posted on March 6, 2014 by theartistaslisalee

One Comment on “Big Brother is Watching You…and demands you give money!”