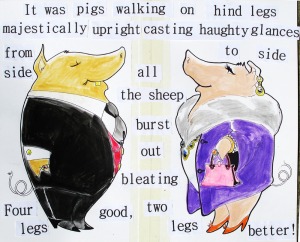 If you have read George Orwell’s “Animal Farm” then you might get this.

Back when I read this in high school I was one of those bored-out-of-mind students nodding away into daydream nation, and not really caring about the literary significance of some book about communism and tyranny of the pigs.  It is only about 15 years later that I finally picked up a copy of the classic paperback and realized its importance, and how well it resonates with the current state of our world.

As I become more and more conscious about the abusive nature of the upper elites and the oppressions of the lower pawns, the negative nature of power and money, and the more recent uprisings in the Middle East and the “Occupy” movements held all around the globe, I have begun to see the significance of the author’s choice to depict the villains of the novel as pigs, animals that by general consensus are often associated with gluttony, greed, selfishness, and filth.  And yet with wit and intelligence (as pigs are also widely regarded for) they had managed to elevate themselves on top of the food chain and style themselves as “more equal than the others.”

The quotes in the image is directly copied from the novel, I forget what chapter it was, but it is the part when the pigs learn to walk like human beings, thus violating the original commandments of the Animal Farm: Four legs Good, two legs Bad.

Posted on September 10, 2013 by theartistaslisalee

← Why I Decided to Become A Visual Artist (Strike Three!)
The New Money →