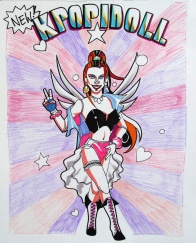 Now you are probably familiar with the whole KPOP scene, which in the last decade has blown the whole world and invaded almost every aspect of today’s youth.

I am Korean, but that doesn’t mean I love all things related to my native country. I admit it: I hate KPOP.

I’ve listened to some of these KPOP songs and while I admit they are pretty catchy and fun, it is not so different from what I have listened to on American radio. Also the lyrics for the most part are appalling: it is so shallow, narcissistic, and makes no sense; it only makes it worse that they randomly throw in some English words here and there not really connecting the lyrics together (they at times even spell out an English word in Korean letters, and it just sounds so ridiculous; even my late grandmother spoke better English) It is pure gibberish.
Even worse than the songs are the singers. Self-proclaimed “idol stars” looking more starved than the kids of Rwanda dressed up in super skinny tight attires and even more unnaturally beautiful than Ken and Barbie are nothing more than pure eye candy for the pre-adolescent school boys and girls ( not to mention some adults with perverse fantasies. I am not too surprised at the recent spike in sexual assaults in Korea). And talented dancers? More like a striptease routine from a sleazy gentlemens club (seriously I can’t even watch some of their dances. Aren’t most of them like still just barely started puberty?). It’s best to leave the sexy waves and struts to Rihanna, sorry but it’s just not right for Koreans to be dancing that way.

The picture above is to show how “artificial” the KPOP idol appears. They almost don’t even look Korean, they want to look too Western-y (sorry I know there is no such word but you get the idea). I can write a book about this, actually, I AM. Meaning this isn’t the last post about my KPOP hate…

Posted on August 23, 2013 by theartistaslisalee

← IDOLLS
Why I Decided to become a Visual Artist… →